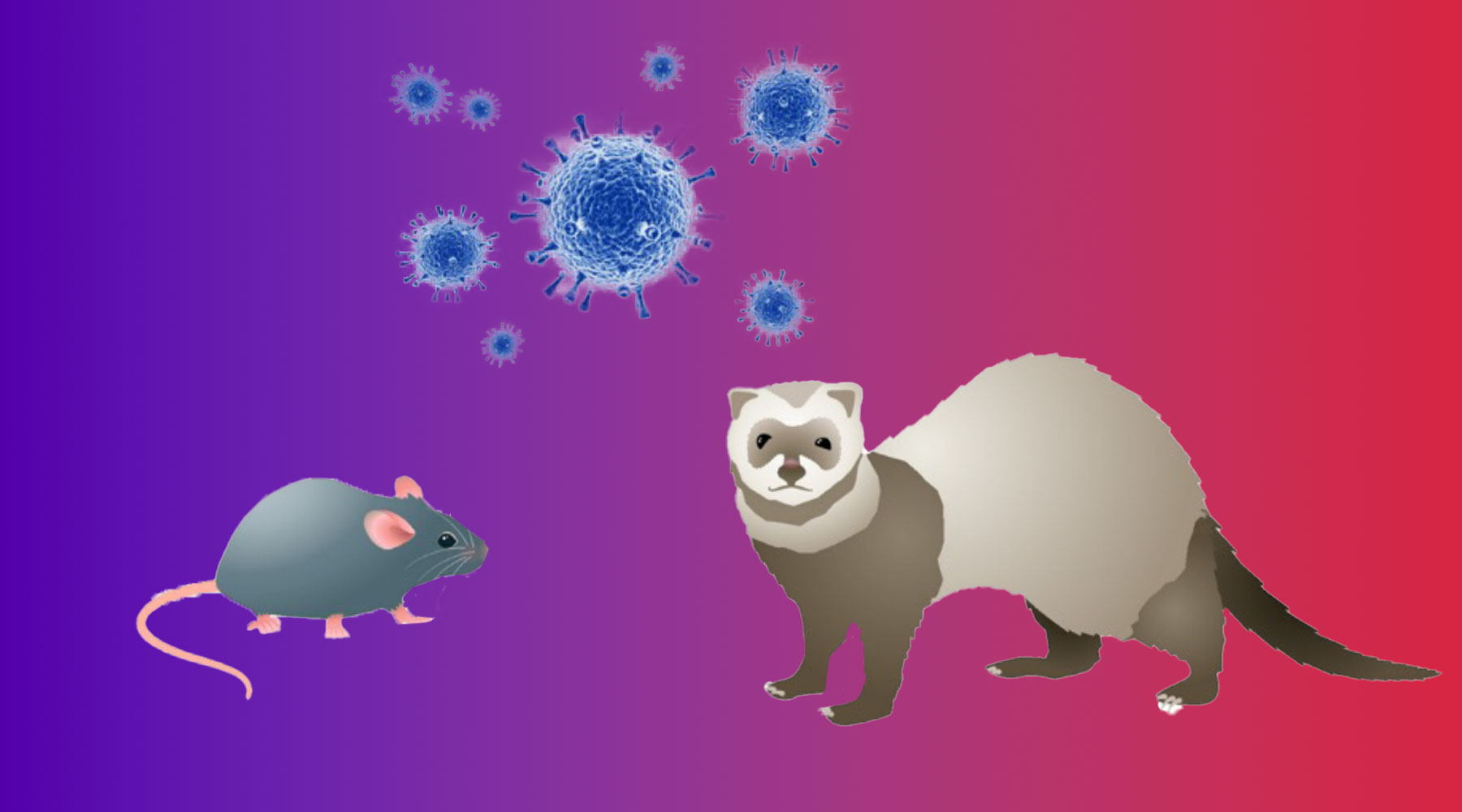 The mouse and ferret animal models are the most widely used models for influenza studies. Each has its advantages. The mouse model provides a relatively low-cost system with a variety of genetic backgrounds and an arsenal of commercially available immunologic reagents to examine the host response to infection. It is the primary choice for preliminary evaluation of vaccine and therapeutic candidates; however, it does have drawbacks. Most human influenza viruses need to be adapted by serial-passage to infect laboratory mice, and the clinical course of disease does not recapitulate that of the human disease.

The ferret model of influenza virus infection more accurately represents the course of human influenza disease. Ferrets are susceptible to infection by a wide variety of human influenza virus isolates without adaptation. Ferrets develop a primarily upper respiratory tract infection and have tractable clinical markers of disease. Virus infection and replication in the lower respiratory tract results in histopathological lesions in the lungs and induction of cytokines characteristic of the innate immune response. In addition, ferrets can be used for models of influenza transmission. The drawbacks to the ferret model are the higher costs associated with husbandry of larger animals and a sparse supply of commercially available immunologic reagents to examine the host response to infection.

To aid in the development of influenza virus vaccine and therapeutics, Noble Life Sciences has established both the mouse and ferret models of influenza infection.

Titration in Balb/c mice: Mouse adapted A PR/8/35 virus (obtained from BEI Resources/NIAID) was amplified in 10-day old embryonated chicken eggs and stored at -80° C until used for titration. A single vial of egg amplified mouse-adapted Influenza A PR/8/34 was removed from the freezer and thawed. Serial 10-fold dilutions were prepared in PBS + 25 mM HEPES buffer. Mice in groups of eight to ten were anesthetized by inhalation of isoflurane and inoculated intranasally with 30 mL (15 mL/nostril) of the diluted virus using a pipet tip resulting in inoculations ranging from 3 x 10 2 mL to 3 x 10-7 mL virus per mouse. Mice were observed for signs of morbidity and mortality and individual body weights were measured daily for 10 days. Animals in which body weights dropped below 80% of their pre-challenge weight (Day 0), were humanely euthanized and scored as non-survivors.

The virus displayed a dose-dependent effect on both survival and body weight loss (Figure 1). Variation in survival and weight loss between treated and untreated mice challenged with titrated virus provide primary end-points in the mouse for the development of anti-influenza therapeutics and vaccines. Additional end points for evaluations include clinical scoring, quantification of virus in the respiratory tract and extrapulmonary organs, production of neutralizing antibodies, and analysis of the immunological response.

Infection of ferrets with Influenza A

Influenza A/CA/04/2009 (H1N1) pdm (obtained from BEI Resources/NIAID) was amplified and titrated in MDCK cells. Ferrets assigned to two groups of six each were lightly anesthetized and challenged intranasally with 102 TCID50 (group 1) or 105 TCID50 (group 2) in a total volume of 1 mL (0.5 mL/nostril). Animals were monitored for clinical signs of illness, daily body weights and twice daily body temperatures. Nasal washes were collected on Study Days 1 through 7 for determination of viral load in the upper respiratory tract by TCID50 in MDCK cells. Three animals in each group were humanely euthanized on days 4 and 7 and lung tissue from the upper left lobe was collected for determination of viral load in the lower respiratory tract and for histopathology. 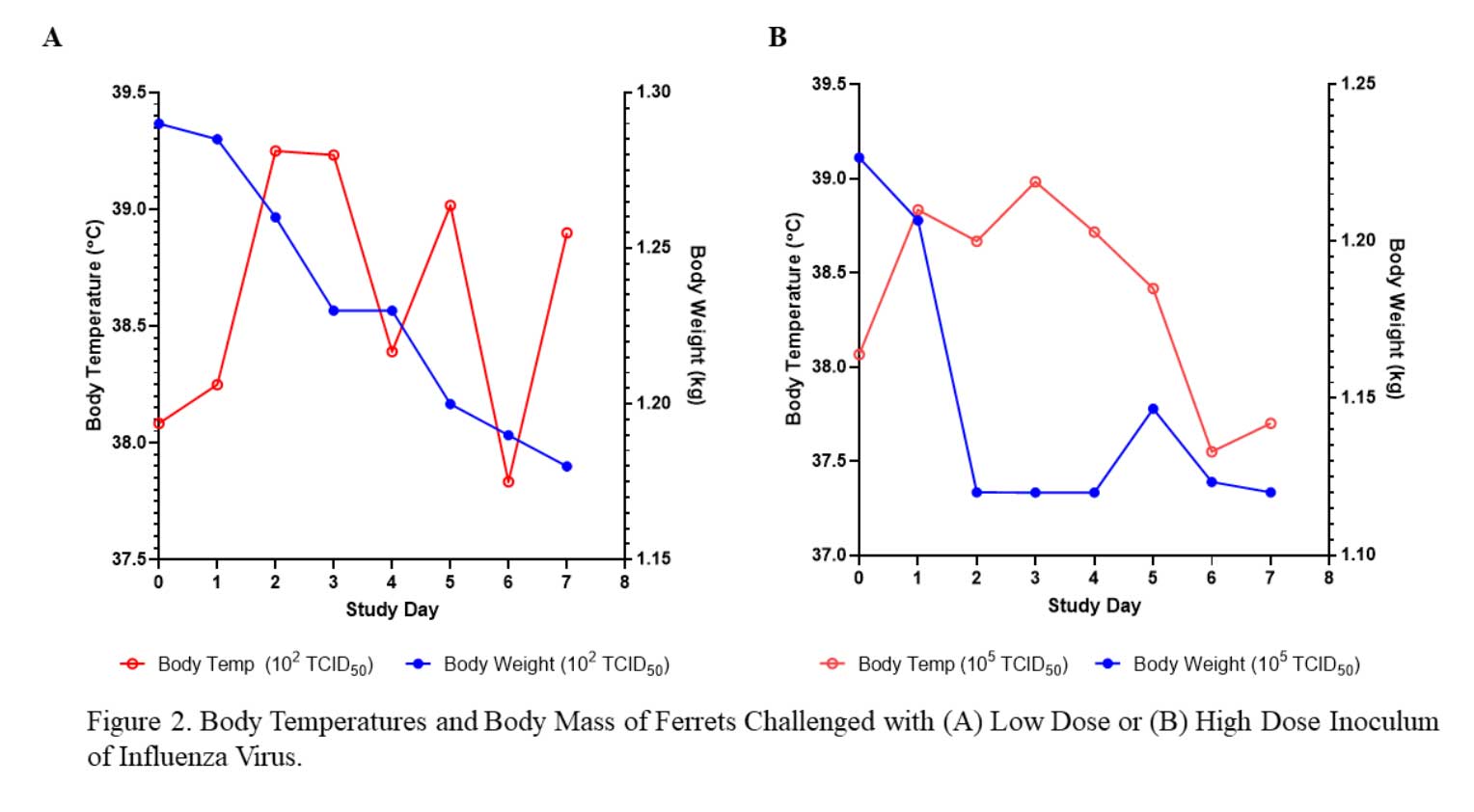 Viral titers in the upper respiratory were quantified by determination of TCID50 in MDCK cells of nasal washes collected on days 1 through 7. The geometric mean and standard deviation of the viral titers on each day are presented in Table 1 and Figure 3. Peak viral titers in the nasal cavities occurred on days 1 and 2 for the high dose challenge group and on days 2 and 3 for the low dose group, correlating with the onset of clinical signs of weight loss and increase in body temperature. The mean viral titers on peak days was 4.11 and 3.97 log10TCID50/mL on days 2 and 3 for the low dose inoculum and 4.78 and 4.79 log10 TCID50/mL on days 1 and 2 for the high dose inoculum. Viral titers decreased for both groups following peak days. Viral titers in nasal washes collected on day 7 were below the limit of quantification ( < 1.6 log10) for both groups. 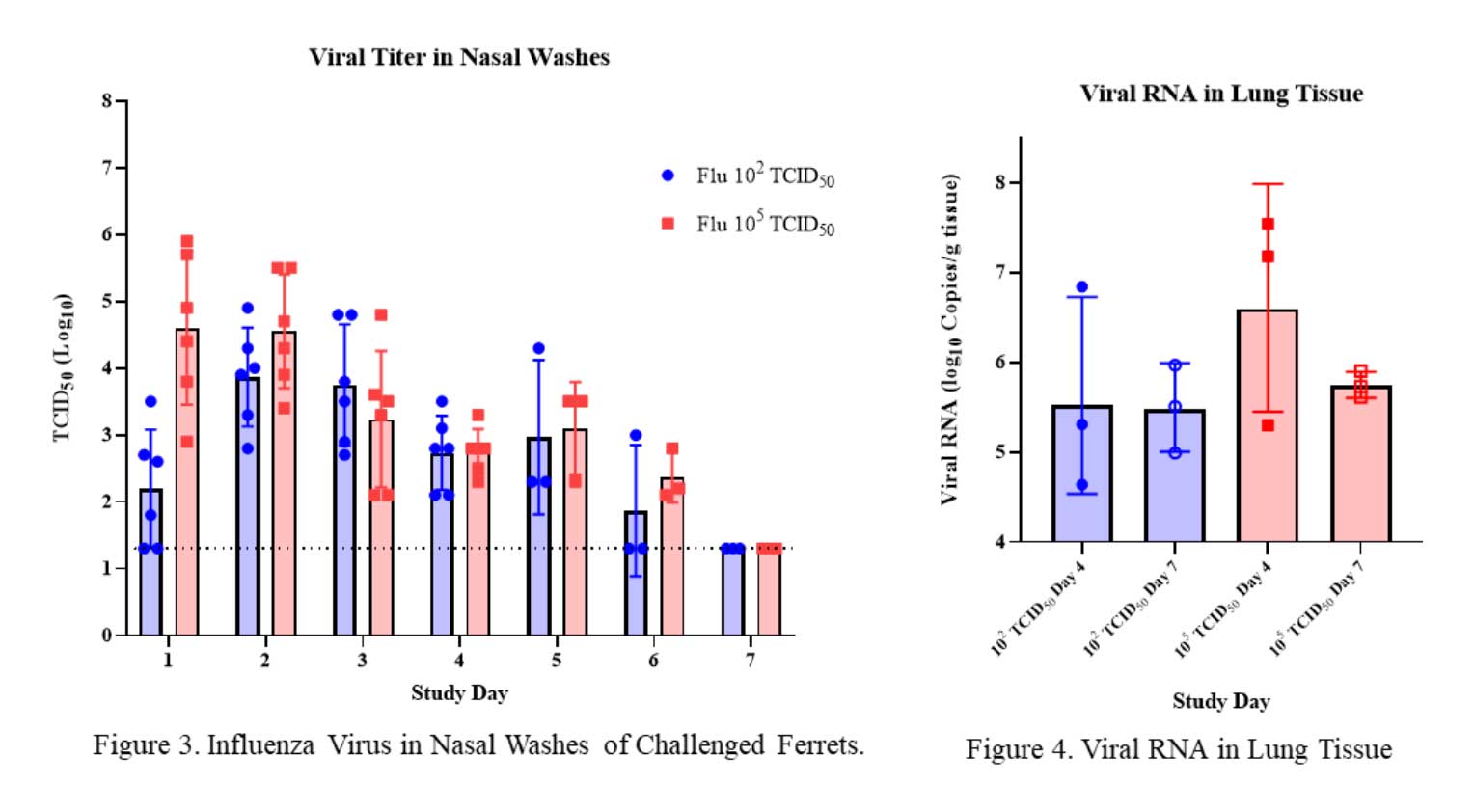 Viral titers in lung tissue was determined by RT-qPCR of total RNA extracted from the upper left lobe of the lungs. Lung tissue was removed from a portion of the upper left lobe of three ferrets from each group on Days 4 and 7 following euthanasia. Total RNA was extracted from pre-weighed sections of frozen tissues and quantified by one-step RT-qPCR using primers and TaqMan probe specific for amplification and quantification of viral gene segment 7 encoding the viral Matrix protein. The quantity of viral RNA in each sample was interpolated from a standard curve generated by amplification of serial dilutions of quantified gene segment 7 sequences. The data are presented as the total copies of viral RNA per gram of lung tissue (Figure 4).

Viral RNA was detectable in the lower respiratory tract in all animals of both dose groups at day 4 and day 7 following viral challenge. Mean viral RNA copies were greatest in the day 4 high inoculum animals; however there was a large variation in the amount of viral RNA between the individual animals in this group. There was no significant difference in mean RNA levels at days 4 and 7 for the low dose group and day 7 for the high dose group with day 7 samples for both groups having less variation between the individual animals.

The ferret model provides multiple diagnostic criteria for evaluation countermeasure for influenza disease, including clinical signs of illness, changes in body weight and temperature, viral replication in  the upper and lower respiratory tracts, and histopathological lesions in the lungs that are similar to those seen during natural infection of humans.

Ferrets can be infected by non-adapted human influenza viruses and virus replication in the lung coincides with the induction of cytokines characteristic of the innate immune response, a potentially important factor in understanding early antiviral mechanisms.

Taken together, the mouse and ferret models of influenza infection provide an essential gateway to the discovery and development of countermeasures for influenza virus disease.